An early start and for once decent weather, in fact it is forecast even better on Sunday with a high on Tuesday, by next week we will be in a heat wave and will all be moaning that it is too hot, not bloody likely given the summer we have had.
The usual Oystercatchers were present on a dropping tide, around 4 of them, no juveniles unfortunately, they may try again but I doubt it now. No other waders were seen other than 2 Common Sandpipers at the Outfall with 2 Great Crested Grebes at the mouth of the Creek.
Common Terns numbered around 9 moving up and down the Thames fishing, these are no doubt part of the Barking Bay colony; they seem to work the Thames from Crossness up to Woolwich and back again. 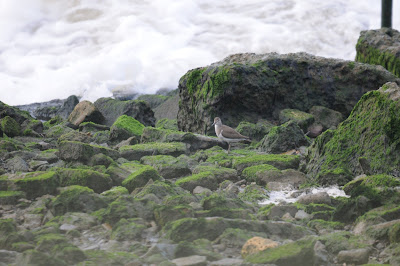 A full grown brood of 5 Shelduck dropped in amongst the adult Shelduck and there were seemingly Gulls everywhere, probably around 500 Black Heads feeding at the Outfall with adult+juvenile Herrings and Lessers sitting all over the river.
With August just round the corner it will not be long for the 1st returning wildfowl and waders.
As you would expect with the sunshine, there were Butterflies everywhere including my 1st Gatekeepers amongst the many Small/Essex Skippers and Meadow Browns, also seen was a Southern Hawker, I am hoping that I have got that right.


One thing you cannot help noticing is the extra Police and Army/Navy presence on the river, they are up and down constantly with the games imminent.

Following on from the Outfall I popped into the Bay as I knew Paul had seen a Whimbrel, by now the sun was out with a vengeance and I was constantly glancing up to the heavens, an early Honey Buzzard or Osprey wouldn’t have gone amiss.
No luck with the Whimbrel but 2 returning Black Tailed Godwits heralded the 1st returning waders to the Bay, further along was a single Redshank. Despite trying to turn every high flying large Gull into an Osprey I had no luck with Raptors until I left, I then got onto a distant Hobby.
Walking along the grass by the sea wall gave up the 1st Wasp Spider of the year for me along with a Brown Hawker and a Common Darter, as usual the Bay was crammed full of Shelduck. 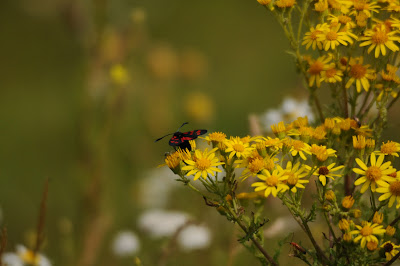 It was only a brief visit and the only other things of note were 3 or 4 Six Spot Burnett’s amongst the hordes of Butterflies and a single Silver Y.

Looking at the Dolphin Jetty the Oystercatcher has again re-laid after her 3 chicks were all lost no doubt to a Crow or large Gull a short while ago. As you can see it is a derelict jetty doing nothing, the plans for next year are for it to be turned into a Common Tern colony like the one slightly down river at CEMEX. Hopefully the Terns will take to it if all goes ahead.