With the Peregrine breeding season in full swing this was the first chance I had to visit the Bay for nearly a month, added to this migration was now dropping off so I thought I would have a crack at recording the breeding Common Terns.


I was not sure of the juvenile hatching time so I was lucky enough to find most birds still incubating, very likely some with small young underneath. At least 3 pairs had small young walking round, very surprising how mobile they are at an early stage. 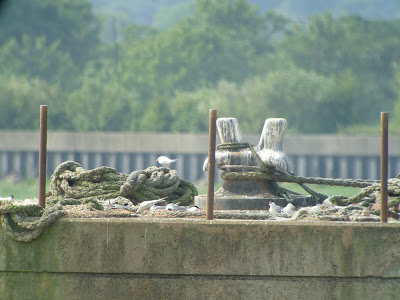 Herring and Lesser Black Backed Gulls cannot get near the colony, there are simply too many Terns to contend with, one immature Herring did drift into ‘ Tern airspace ‘ and was immediately set upon by no less than 11 Common Terns. The real danger to the colony is Great Black Backs, they can and will just bully there way in with aggression and size. 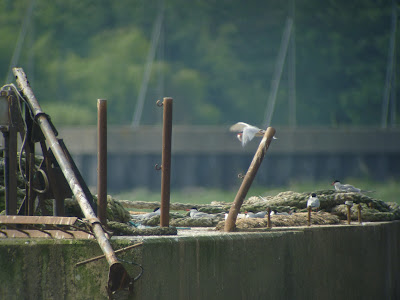 After passing over the colony at least 3 times I came to a figure of 29 pairs, I cannot see the south side of the Jetty so this is very likely an undercount. Talking to John Archer shortly after he estimates, and I agree with him, there are around 80 Common Terns on this section of Thames at Crossness/Barking.


With this many Terns around it is also possible that they are using another unknown jetty for breeding, definitely worth looking for and then all the colonies can be safeguarded. This also opens up the possibility of further increasing breeding Tern colonies along the Thames by creating new ones on the river, there are certainly enough redundant jetties. Numbers seem to be decreasing elsewhere so this may be an answer.

On the walk back decided to give the Butterflies and Dragons the once over and try a few different settings on the camera.


Meadow Browns were out along with a few Small Heaths and around 6 Common Blues. Best of the Butterflies were 5 Large Skippers, firsts of the year.

On reaching the pond I found 2 male Emporers and 2 Black Tailed Skimmers. I tied myself up in knots trying to photograph the dragonflies on the wing, need a faster lense, good fun though.