Each year I monitor a number of Peregrine sites at fledging time along with others trying to gauge it right and be on hand when they ‘ jump ship’. Some sites you can work out more or less when they are likely to fledge, if you can get the exact date of egg laying (CCTV), and others I have to wait and ‘scope’ the juveniles to age them.

For those not familiar with fledging peregrines, they do have a habit of grounding as mentioned earlier in the diary with the juvenile that died in an unfortunate accident. Much depends on the nest area, if there is an adjacent flat area where they can exercise and make short flights, they are usually ok. The weather plays a big part, still windless days are a nightmare, no lift.

The nest sites that are confined are usually the ones that give problems, there simply is not enough room to build and strengthen wing muscles for 4, or even 5 juveniles.

Last year I was lucky, I had a couple low down, on separate sites, but these got back up under there own steam, hunger is a great motivator, if they are too low, the adults will not come down and feed them unfortunately.

On Thursday I was called to a site in London( Fulham&Barnes Peregrines ) , Nathalies site as a juvenile had come down, looking at it when I arrived, it still had 3 or 4 days to go to attain full fledging status, why it had gone we did not know, perhaps an adult had tried to coax it out with prey, or a strong gust of wind. (Looking at the CCTV recording later showed it went of its own accord). 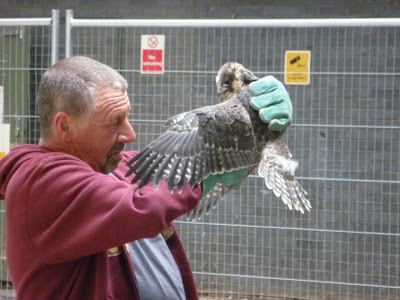 Peregrine juveniles like most birds of prey are full of attitude, this one certainly was as it did it best to penetrate my gloves, even as juveniles the strength they display in there talons is considerable, this was a female. A cardboard box had been placed over it to contain it, this also helps to calm it down. The juvenile was taken back up under licence, and then released on a high point near the nest site. The following day the adults found it and all was well.

This bird was in a confined nest area on another site which did not allow much room for exercise, it was a small space even for the 2 juveniles that occupied it.


This bird came down on the Friday, the site owners quickly contacted me and did very well in keeping the bird in sight, well done to them, I was then able to catch the bird and return it to a high point below the nest. It is good to know that the system works, it gives me a lot of satisfaction knowing that I and others have made a difference, these juveniles will now get the chance they deserve. The site in question is not manned during the weekend and is quite desolate, with the juvenile down and food/stress calling for an adult, there was every chance it would have ended up as Fox food.

This bird came from the same nest site as the 1st juvenile, it also fledged on the Thursday, it was seen to go on CCTV on Saturday and that was it, gone.

On Saturday late afternoon it was relocated, quite a way down from where it should be, and also not having fed.

On catching it, it was still lively so it was then taken back up to the roof to join its sister, we were hoping that the adults would feed it in the evening.

I learnt this morning (Sunday) that it seems to be making up for the last few days and has had 2 feeds along with its sister.

All the juveniles are now getting fed so they should be ok, juveniles 1 and 3 are from Nathalies site, there is a 3rd juvenile in that nest that has not fledged, fingers crossed…..