Another year gone by, they seem to fly by so quick these days, however it was another good year on the Peregrine front for the pairs that I am monitoring.

Little did I know where this journey would take me 22 years ago at Battersea Power Station, I still have the same enthusiasm for Raptors and more specifically peregrines to this day, and my biggest kick is still building a nest box/tray and seeing it get accepted.

Now at the tender age of 65, I can’t believe I get my pension next year (although with this Government they are likely to raise it to bloody 76) the body is not what it once was, and my joints are protesting big time after a lifetime of Steelfixing.

However, I still love it and I have no intention of going gracefully into retirement, more boxes to build, with nothing to do I would stagnate and probably go nuts, I need to be doing something.

I have to say a massive thanks to all my very good pals Paul, Shaun, Mart, Lee, Jake, Ben, Russ and his mate for all the help they are giving me, whether it be installing Peregrine/Barn/Little Owl and Kestrel boxes, or getting me the materials to build them, I simply couldn’t do any of this without their valued help.

Back to the review, it was a good year for the pairs, 31 juveniles fledged, as per usual, not without incident and dramas and urban fledging, continues to be dangerous and precarious much of the time.

Of these 31 juveniles – 9 were in Nest Boxes provided and 3 were in Trays with one pair ‘natural’, this was the Parliament pair who fledged 3 juveniles.

Of the ‘publicised’ sites, Battersea laid 2 eggs but sadly they didn’t hatch, both were eventually removed and sent to PBMS, little development inside unfortunately, it seems age has caught up with the 12+ year old Falcon. 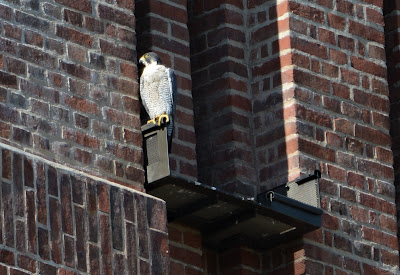 Battersea - they have taken to the new nest site well. 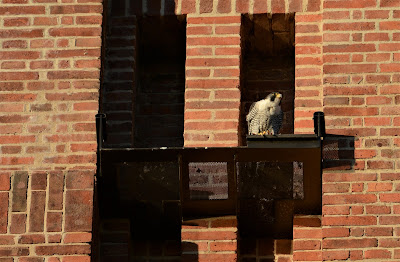 Parliament this year was ‘natural’ in another area despite being in and out of the nest box in the run up to egg laying.
I have been using recycled plywood and 2x2 offcuts for Barn Owl boxes and more recently, I have just completed a recycled Peregrine Box using the same materials. This will be installed asap on an East London site, unfortunately the pair failed in the spring, hopefully the box will do the trick.

This ply box may not have the shelf life of an 8x4 sheet of conventional ply at £45.00+, and that is a cheap sheet, but being recycled from old packing crate lids is a step in the right direction for me. Once weatherproofed, I give it 4 coats, it will hopefully last just as long as a conventional sheet.

Even the 2x2, again not cheap to buy, is from off cuts from jobs, so rather than go to waste, or be thrown or burnt, it is getting a secondary use.

We again colour ringed at 2 sites which produced 7 chicks/juveniles and Paul/Shaun also colour ringed 5 ‘grounders’, from various sites, where they have ended up at South Essex Wildlife Hospital, as you know they do incredible work there.

Again, a massive thanks to Sue, Tom and all the staff, over the years I, along with the RSPCA have taken a number of juveniles into them that were found grounded, trapped or poorly, without all their hard work, care and dedication, they wouldn’t have made it back and been given a second chance. 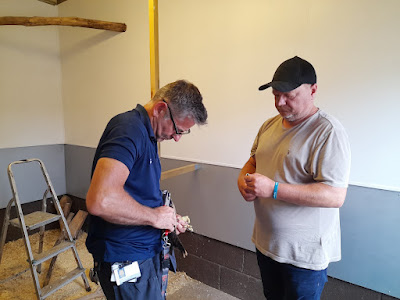 My amigo's ringing birds that are going back 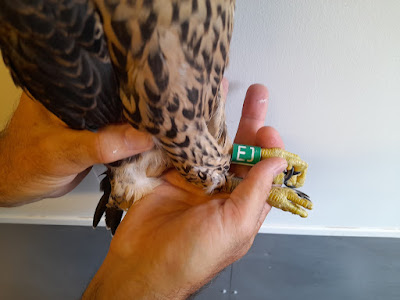 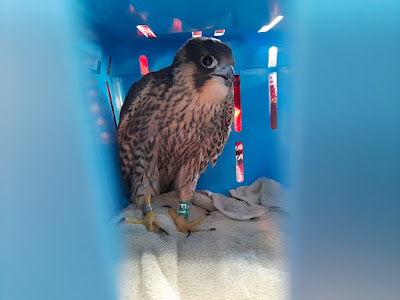 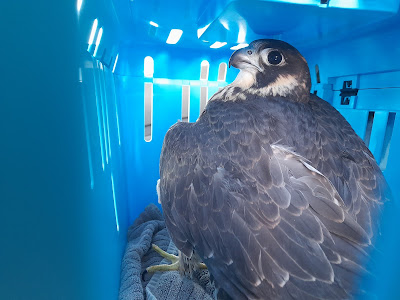 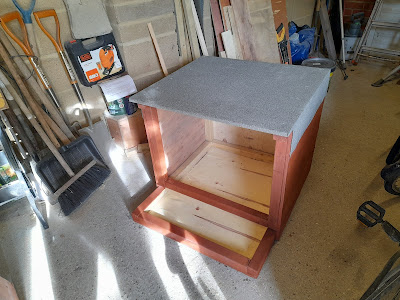 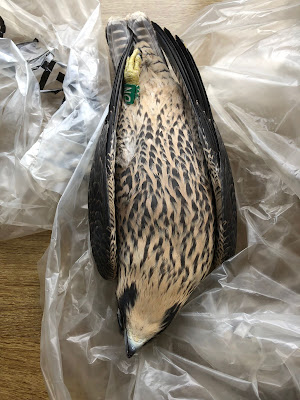 Sadly they don't all make it, one of the ringed juveniles that died from collision.
Totting up all the boxes/trays that have been made/installed for the various species., it works out to the following.

Barn Owl Boxes – 7 – this will be 8 shortly with another pole box going up this week.

The take up on the other species boxes, compared to peregrine boxes is slower, there is a higher acceptance rate on the peregrine front and rarely do peregrines, not respond to a box being placed. I have had it happen on a couple of sites but ironically, they have been accepted and taken up the following year.

In the case of peregrines, once accepted they are glued to it annually, thereafter, Barn Owls it seems are different. A pair accepted a box we placed in 2021 fledging 5 juveniles, so I thought breeding was again nailed on for 2022 for this box. This was not the case; they chose another box, and a pair of Stock Doves used the box.

Never take anything for granted it seems, it will be interesting to see if the Little Owls again use the box, they successfully used this year, if I can keep that bloody Grey Squirrel out hopefully so! 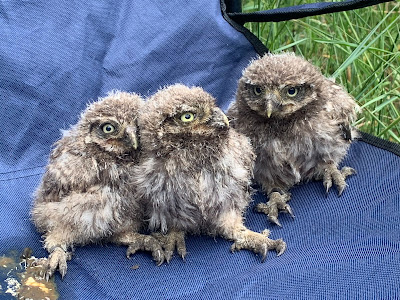 Hopefully the same again next year - Little Owls
Posted by Dave Morrison at 23:48