I visited on Sunday Sept 2nd, a great morning weather wise at dawn promising a good day; hopefully I would catch up with the Peregrines.
Recent visits have unfortunately been peregrine less with neither of the adults showing at dawn let alone any of the 3 juveniles, however I have had this before where they simply move around there territory.

On arrival on Sunday I located the Falcon straight away as she came out of roost on Middle Tower, she immediately then moved to Victoria Tower.
Signs looked good as I viewed her through binoculars, her crop was not full so hopefully hunting was on and so it proved. I got a few photos of her aloft and then moved round to Victoria Gardens Park.
From watching her it was obvious from body language that she was going to hunt, head bobbing and looking in all directions for the chance of prey. 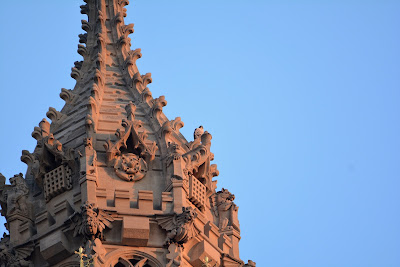 At 6.28am she suddenly went heading towards Lambeth Bridge on her 1st hunt, quite obviously on something as she closed her wings to build the all important speed for the hunt.
Lost to view behind the trees, I then waited for her to return, she was successful on her 1st hunt, it usually takes them 6+ hunts to take prey. 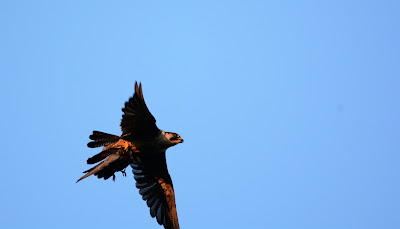 She came over with the pigeon and then made for Westminster Abbey; this is where I found her a short while later feeding on one of the Abbey's wide ledges. 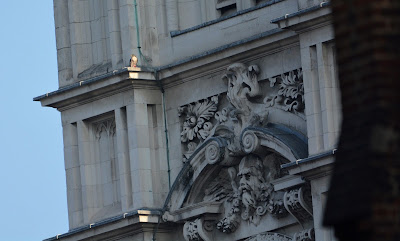 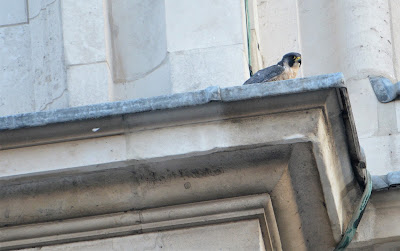 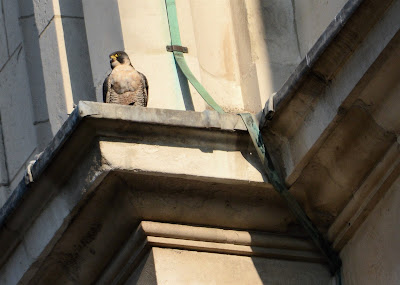 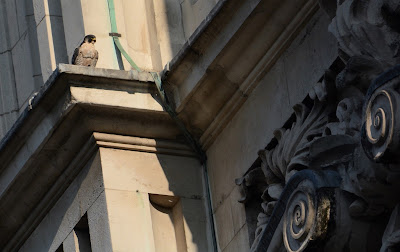 After a while the Tiercel turned up on Victoria Tower, looking at him it was also apparent from his crop that he had already eaten so would not be making a nuisance of himself by begging from the Falcon.

Eventually both adults retired to the shade as the heat built, although they enjoy a bit of a sun bath in the early morning heat, higher temperatures and strong sunshine always has them seeking shady areas.

Juveniles? I was there around 3 hours and did not see one of them, as with many other sites in London it looks like they may have gone their own way already, good luck to the 3 of them.
It’s also possible that they are just out exploring the territory and like the proverbial teenager just come back when there hungry, however I would have expected to have seen one of them.

Parliament and McAlpines have recently fitted the foam on the top hand rails on Big Ben where debris netting is used, a massive thanks to them; it will make it a safer environment and take away the risk of snagging when landing.