Barking Outfall
On arrival  was optomistic that there could be a good Tern around but despite giving it a good while no Black or Sarnie put in an appearance.They have started to show and it is early days yet so will keep plugging away.I did manage 18 Commmon Terns along with 4 Oystercatchers, 7 Common Sandpipers and the first group of Shoveler back numbering 5 birds.
For some reason there is a large build up of Mute Swans on the river and they have been steadily increasing over the last month, they are now up to 41 birds, last year I was lucky if I got 3 or 4. 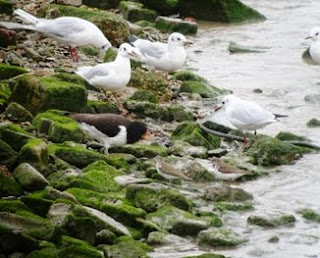 Barking Bay
I visited in the hope of seeing the Black Tern which I had been told about, got lucky  with one seen but they were distant views over at Crossness Outfall.The tide was now out with a lot of exposed mud but unfortunately hardly any waders present barring a solitary Ringed Plover.Was also hoping that the 4 Avocets at Rainham may come down this way.

Dagenham Riverside
Again very little on the mud with only 2 Common Sandpipers seen + 9 Common Terns moving down towards Rainham.With little Tern and wader activity, something is happening, I am starting to look at Gulls, never thought it would happen as I have always been a hooked beak and talon man.Am now setting my sights on finding a Caspian Gull, I know they turn up directly across the river at Crossness most winters recently.Went through them and did find an adult Yellow Legged Gull along with a couple of immature Great Black Backed.