It’s possible that things may be moving faster than previously thought, on arrival on Sunday; it was obvious right from the start that the hostility from the adult Tiercel has intensified towards the sub adult. They have always clashed but after 6 months+ it always appeared to me that the sub adult had the upper hand being more territorial, if he didn’t he would have been gone long ago.

The difference this morning was that the adult Tiercel had moved in it seemed to the Power Station site and was openly challenging the sub adult. The immediate clashes that took place were more aggressive and it seemed that the adult was really upping the ante and stating his claim.

The sub adult for his part defended the nest box tower and returned to it every time they skirmished, the Falcon however took absolutely no notice, ignored them both and then commenced to hunt, taking a Feral Pigeon on her 2nd hunt.


Quite surprising however was that the Falcon then allowed the sub adult to take the whole prey after she landed with it, whether she intended to let him have it voluntarily is unknown, in a sense he is using the bond he has with her to 'bully' her off it.

Normal behaviour on a pair is usually for the Tiercel to await the Falcon until she has finished feeding, I suspect he is using the maternal bond to his own advantage and also becoming a bit of a bully, even though she often feeds him.

However when he then decided to fly off with the prey he was then intercepted by the adult Tiercel no doubt also realising he was at a disadvantage with the prey, the adult put the sub adult through the ringer repeatedly above the Thames.
To cut a long story short the younger peregrine is a lucky little chap, he defended well from the constant attacks, Peregrines when clashing often bunch their feet and try and hit the head or a wing to cause damage, they also do this with larger Raptors and Prey also.
This was apparent from one of the photos showing the Tiercel with his feet down bunched after a very high speed pass. 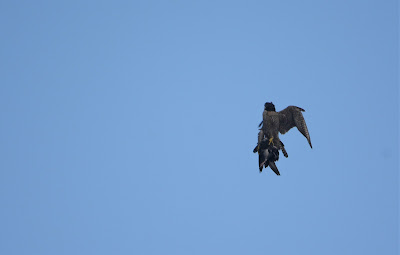 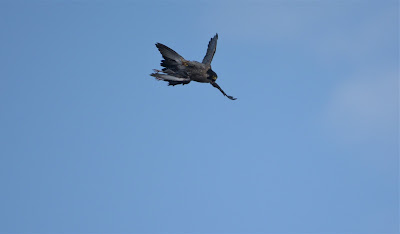 The sub adult survived the morning and was still present when I left, however it was quite obvious that the adult Tiercel was now piling on the pressure, it looks like he no longer will accept being on the fringes. 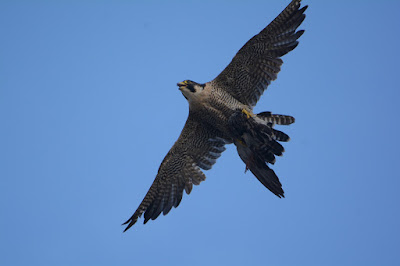 Whilst on the newly opened Coaling Jetty I also came across this Bull Grey Seal, good to see this far up the Thames. 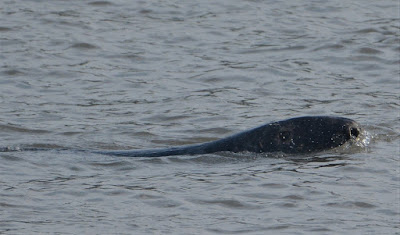