It’s that time of year again, with 15 sites to monitor, obviously not all successfully breeding but a majority are, it’s inevitable that some will mess up on their maiden flights.

The first this year was on May 24th, this was dealt with and relocated back up to a high point by Paul, he also ringed the juvenile with a green ring. We use these at 2 other sites for normal ringing and have been for the last 5 years, however this year, given the number of annual grounders; we decided to put a green ring on them where possible.

On Tuesday June 4th we relocated one of 2 siblings; the other is still being looked after by the Wildlife Hospital and hope to release it by Friday, however yesterdays release went well.
As I have said before Sue, Tom and all the staff do an incredible job at the Hospital, if you want to give money to a great cause this is it people.

As the only siblings and both down, I always try and get them back asap to make sure the adults are firstly, still present and secondly the bond to young is still retained, the sooner the better.
On release on Tuesday, adults were present which is half the battle, you need visual contact, the juvenile flew straight away and strongly quite surprisingly. 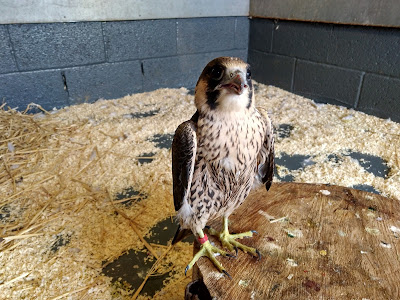 When we got back to ground level we could not locate it but suspected it was on another building going on adult behaviour so I returned the keys and came back around 30 minutes later.

As soon as I arrived back I could hear it, a short time later out it came and flew quite good, even doing a mock ‘attack’ on the side of the building before heading to another building and landing relatively well. All this time both adults were watching it which was good, what surprised me however was how well it was flying.

It was quite windy which was good, plenty of lift which made flying a lot easier, as I have said before hot windless days are usually not good, hopefully more of the same at the end of the week and the family will be complete again.