For the last 2 weeks I have been on Jury Service, if you have not done it, it is an eye opener as to how the judicial system works. If you have a case it occupies your mind, if you don’t it is hard work occupying yourself all day, you can only read so much and you can only leave your ‘lounge’ between 1.00pm and 2.00pm.None the less I found it very interesting after previously dreading it, I was lucky, I had 2 lengthy cases both weeks, an added bonus was being released on the Thursday.

I left pretty home pretty early and timed it spot on for a rising tide, the light was not bad but the wind was getting stronger by the minute. Checking the Fleet showed at least 12 Common Terns following the tide in and a lone Greenshank was the only wader of note amongst 20 or so Oystercatchers. As the tide rose 40 odd Curlew dropped onto the Salting’s.
I was not expecting much in the way of waders given the time of year so a nice surprise was seeing a flock of 21 Black Tailed Godwits dropping in to roost.
Moving on I had a calling flyover Yellow Wagtail and a Cuckoo going across the Fleet and also 4 Sandwich Terns came in with the tide.

The wind unfortunately was keeping all the small stuff down and I only picked up Common Whitethroat on a round robin walk, Gulls as usual were everywhere. It was while I was watching these that I saw a Carrion Crow catch and kill a near full sized juvenile Black Headed Gull. The unfortunate gull was sunning itself on a grassy ridge, most likely asleep and the Crow simply landed on it and then proceeded to hammer the life out of it.Very, very hard to watch but this probably happens every day, as you could imagine the gulls mobbed it relentlessly to no avail.

Another surprise came in the shape of a Knot, looking at it I would probably say a 1st summer? I originally thought it was a juvenile Dunlin but looking at it and the photos shows it to be far too plump and large for a Dunlin, cheers Paul. It is easy to be wrong with waders and I must admit they do get me at it sometimes, like today.

I dropped in on the way home, as many know it is a good Dragon and Butterfly area, unfortunately it was very windy, overcast and with occasional sunshine, this did put a dampener on proceedings.
Despite this I still had some good firsts for the year including Broad Bodied Chaser and Brown Hawker, the latter defying every move I put on it to get a decent photo. 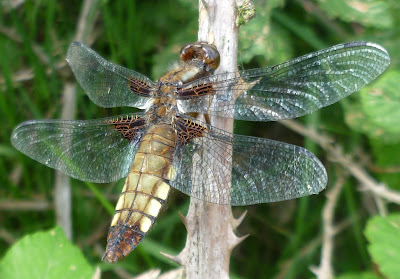 The one Butterfly I was hoping to see was Marbled White, even with the strong wind I thought I might get one, alas no, I wonder if they are not out yet?
I did however catch up with no less than 4 White Letter Hairstreaks, very high up so very distant photos, but still good to see, in better weather they will hopefully come down lower.

Other goodies seen were

Hopefully the weather will be better over the weekend, fat chance!