Having visited recently looking for Grey Partridge with Dominic, decided to do the circuit in the hope of some Smew, they usually arrive around the start of December.

All the fishing lakes at Mollands were frozen over with only a handful of holes being kept open by Mute Swans, going through these eventually produced a cracking Red Head Smew, very distant but close enough to id.


As you would expect there were tracks everywhere in the snow, some of the drifts were 2 foot deep, as I walked on towards Grange Waters Scuba Diving lake, I flushed a Muntjac at my feet, quite a surprise as I did not realize they were in the area.Dont know who jumped higher, me or the Muntjac. The Scuba Lake was unfrozen and loaded with Tufties and Pochard, it looked very good for a rarer bird but nothing materialized .

As I walked round the edge woodland I got onto a calling Marsh Tit, have not had one in a few years and undoubtedly in the area due to the cold weather. A rare bird to find nowadays in Essex, try as I might in thick cover, the little bugger would not let me photograph it.

Birds seen on the circuit were


I also met a Falconer who had an immature male Goshawk, an absolutely stunning bird, he very kindly let me take some photo’s of the bird on a post, if he reads this, thank you very much and hope you enjoy the photo’s. 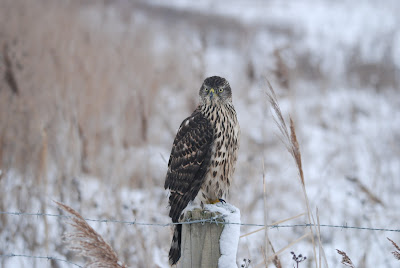 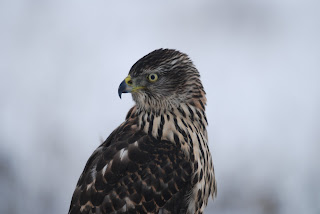 With all the speculation and confusion over male Goshawks and female Sparrowhawks when they are high up thermaling, it was good to see a Goshawk close up and see the differences.