On Saturday myself, Paul and Shaun took a number of very nice people around the site to show them some of the local species, and hopefully show them a cracking little site which is on their doorstep. The walk was organised by Fransesca Barker of the London Wildlife Trust who works from the visitor centre at Barking Riverside. The weather it has to be said was not kind with a strong south westerly, consequently all the smaller birds had disappeared and were hiding in cover due to the wind.

Contrast this with the day before when I visited, blue skies, no wind, Skylarks, Meadow Pipits and Linnets everywhere, the Skylarks were even displaying in December,crazy.You can’t arrange nature, but on the day of the walk the waders came up trumps which made up for the lack of passerines. 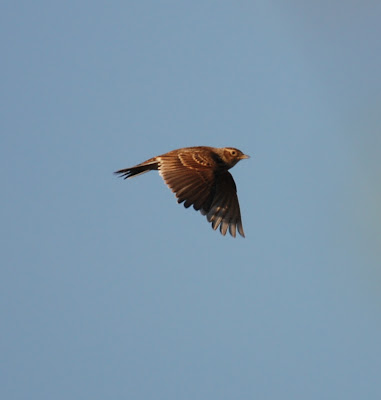 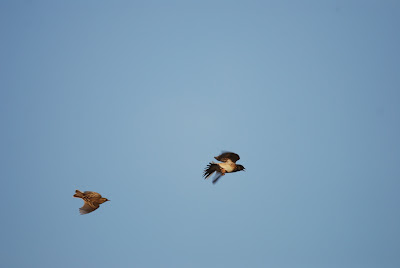 Pick of the bunch were 10 Curlew, around 25 Black Tailed Godwit, Paul found a Grey Plover, 40 Redshank and a wheeling flock of around 400 Dunlin on the river favouring the Crossness side.
Hopefully everyone enjoyed the walk, there are plans to organise another in spring when there should be more migrants coming through.

In search of Smew - Sunday

Every year at the start of the winter period I head for Grange Waters, starting at Mollands Lane and then walking a circular route taking in the 6 lakes. Over the years the Smew here have been pretty regular and start arriving from December 3rd onwards. It is an enjoyable walk and over the years has turned up some goodies like Long Tailed Duck, Black Necked Grebe, Marsh Tit, Bittern, Lesser Spotted Woodpecker, Gooseander, Red Kite and several Goldeneye.

On Sunday I made my usual dawn start and thoroughly covered Mollands Lane, no Smew but 68 Gadwall, 44 Wigeon, Chiffchaff, Cetti’s Warbler and 5 Fieldfare were the pick of the bunch. As both sites are fenced it is possible that they were hidden behind the islands.
One rather unsavoury incident did occur in the shape of 3 large dogs chasing the horses; I suspect they were from the Travellers site nearby as this was where they headed shortly after. All 3 were quite big, an all-black German shepherd type, an Akita/Husky and another whose origins I did not have a clue on. I like to think I am pretty good with dogs but must admit to feeling a bit apprehensive if these 3 Herbert’s caught me in the middle of the field as I crossed towards the Scuba Diving Lake.


On a better note after the walk I drove down the private road and visited the stables to let them know of the dogs, they were obviously concerned and the chap whom I know was going to look into it.As I was talking, I was conscious of the background noise of Jays, they were obviously on to something in the Firs so I decided to have a look. After a little searching I found a Tawny Owl huddled up tight to the main branch, not great views but very welcome since it has been a while since I last saw one.

Although I got some good birds, no Smew materialised, again there are a lot of little inlets that they could hide along, or they simply could not have arrived yet. Large numbers of wildfowl were present on the 3rd lake along with a calling Water Rail and a Cetti’s Warbler.
A Tiercel Peregrine and a Common Buzzard were the best of the raptors and 2 Bullfinch were also seen along with 16 Fieldfare. 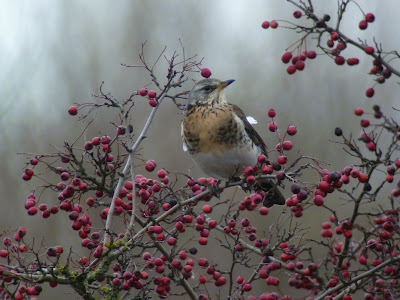 I hope to visit again this weekend.