A rather overcast morning as I walked down to the Valley, I decided to change the usual route and walk the Farm Trail first in the hope of a Brambling mixed in with the Chaffinch flock. The game crop provides a good source of food and cover, Reed Buntings were hovering around the 20 mark with a similar number of Chaffinch, 8 Yellowhammers were the highlights. No Brambling but I did have a flock of 37 Fieldfare over.

I also had in my head that the Bittern has probably arrived at Berwick and was making my way there but got side tracked by a mixed flock of Redpolls/Goldfinch in Berwick Glades, it was here I stayed as I tried to get a few photos. The light was bad and the photos that I did get were just about passable, I decided in the end that all were Lessers with one rather pale and well-marked individual getting me at it for a while. The bird even looked larger so remain undecided on that one, need better light and views, lots of variation amongst them though. 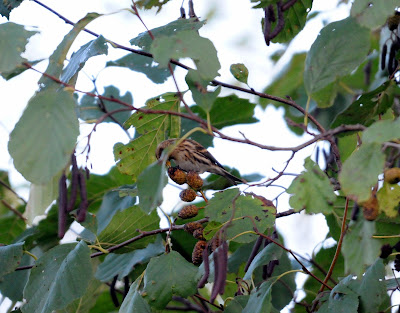 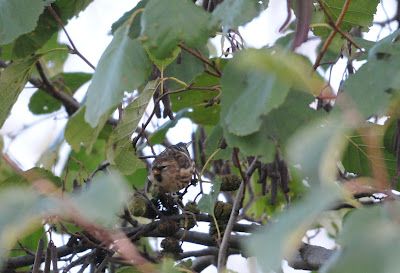 A few Siskins were mixed in with them also; these even provided a patch year tick along with a flyby Rook amongst the many passing Jackdaws.
2 calling Golden Plovers high up overhead were the first of the winter.
One bird that was once a regular here every winter was Stonechat, they have been more or less absent since the bad winter a few years back, it is one that I look for every time, in previous winters there have been up to 6 birds on Ingrebourne Hill. I am starting to see them at Rainham again so hopefully they are on the upturn although there are still none at Barking Bay. 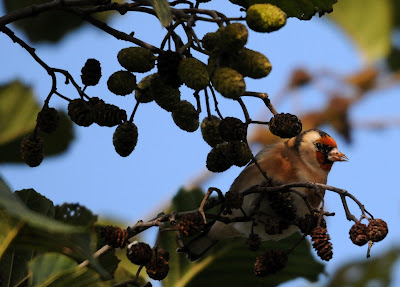 Heading back towards the black bridge showed the water levels still very high with the viewing area still holding a lot of water, as I write this on Sunday it is pouring down so no doubt by now it has burst its banks again.

Only a few Teal were in the viewing area and little else to finish the morning off.